Gabriel Nyoni is off the mark at his new ABSA Premiership side Maritzburg United after his solitary strike propelled the KZN club to a 1 nil victory over Royal Eagles at the Princess Magogo Stadium today.

The former Highlanders and CAPS United speed merchant, who recently joined Maritzburg, came off the bench to score the only goal of the game as the two sides battled in KZN Premiers Cup.

After the game, Maritzburg United took to microblogging site Twitter to announce the result of the game. 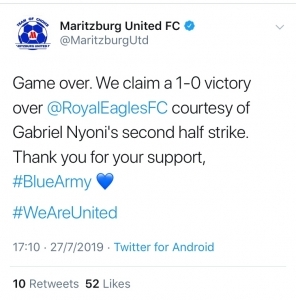