Galatasaray are reportedly eager to sign red-hot Zimbabwean striker Tinotenda Kadewere in this January transfer window and their interest seems to have escalated.

The Turkish giants are of three European clubs said to be interested in the services of the 23-year-old striker, who had an exceptional 2019, scoring 17 goals and providing 4 assists for his French Ligue 2 side Le Havre.

Many Turkish publications profiled the Zimbabwean striker yesterday, amid massive interest from Galatasaray, with some even claiming that an agreemenent had already been made between the two clubs for the player to move on loan this January.

Infact, a supposed agreement between them (pictured below) claims that Kadewere will be at the Turkish club on a six month loan stint. 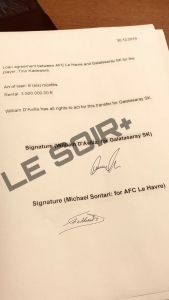 Neither the player nor his represantatives have broken silence on the situation nonetheless.