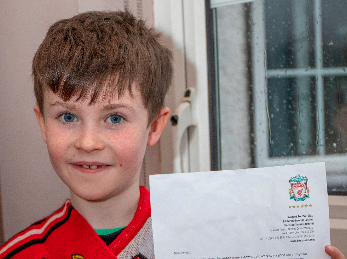 Liverpool coach Jurgen Klopp has admitted responding to a letter wrote by ten-year old Manchester United fan Daragh Curley who requested the Reds to stop winning matches as it was making him “sad”.

The Merseyside club is riding on a forty-three-game unbeaten run in the Premier League and is on course to claim its first championship title in 30 years after opening a 22-point lead at the top of the table.

The streak prompted Curley to write a letter to Klopp as part of a school assignment.

The young fan also told the German gaffer that he did not want to see Liverpool break Arsenal’s 2002 record of 49 unbeaten Premier League games.

According to the Mirror, he wrote: “Liverpool are winning too many games. If you win nine more games then you have the best unbeaten run in English football. Being a United fan that is very sad.

“So the next time Liverpool play, please make them lose. You should just let the other team score. I hope I have convinced you to not win the league or any other match ever again.”

Klopp then wrote back thanking the young United fan for getting in touch while politely declining the 10-year-old’s request.

His reply read: “Unfortunately, on this occasion I cannot grant your request, not through choice anyway.

“As much as you want Liverpool to lose it is my job to do everything that I can to help Liverpool to win as there are millions of people around the world who want that to happen, so I really do not want to let them down…”

Klopp admitted to the press on Friday that he replied Curley, saying: “It wasn’t me feeling sympathetic – I had time, but I can’t answer all letters I get in a day – I get a lot.

“But it was nice, it was cheeky. I had time that day so I read the letter and replied.”