Nigerian footballer collapses on the field, dies after ambulance failed to start 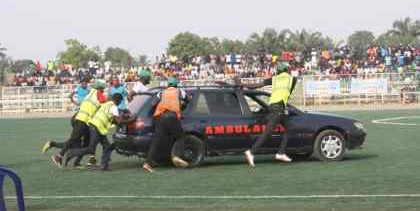 In a bizarre but very sad development, a Nigerian footballer colapsed on the field of play and died due to the available ambulance’s failure to start.

Chineme Martins (22), who played for Nigerian League side Nassarawa United, reportedly slumped during his side’s 3-0 win over Katsina United on Sunday.

It is alleged that after the player collapsed, the available ambulance failed to start and even the efforts by 5 men who tried to push it could not salvage the situation.

Videos of the player’s teammates, sobbing uncontrollably due to the catastrophic incident, have been circulating on various forms of social media as the Nigerian football fraternity tries to come to terms with the shocking episode.