Harare giants Dynamos’ 2020 fans replica jersey officially released yesterday has generated a of debate on social media, with some fans even questioning if it can actually be referred to as a replica jersey.

Fan page Dembare TV announced on Twitter that fans regalia is now available at a cost of US$10 and also provided contact details but an image of the sample shows that it leaves a lot to be desired.

The material of the shirt is that of those tailored t-shirts sold in the Central Business District, paving way for one user to blast the ‘designer.’

“They call it a replica jersey and it is said to be costing US $10 is this a replica jersey or its a t-shirt as in its in the same category with those netone replica jersey. We don’t deserve better leadership at Zifa kusvika takuziva differences  between t shirt and jersey,” wrote one Tay Bells.

“Whatever ‘that’ is, it is horrible and definitely not worth paying USD$10 for, Dembare fans have failed to find a decent designer among the ‘7 million of them,” replied one Mr Tich to the post.

Check out the image; 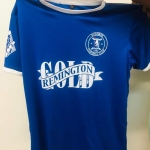