The World Cup dream which was 90 minutes away 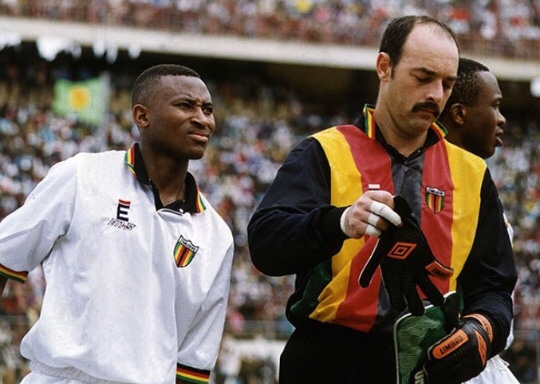 Reinhard Fabisch’s Zimbabwe senior men’s national soccer team of the early 90s is one which is given an iconic status in the history of football in the country.

The German tactician manufactured a well-oiled machine which even up to now, those who watched it run of words in an attempt to desribe it.

From the legendary former Liverpool goalkeeper Bruce Grobbelaar, to the late Mercedes Sibanda, Benjamin Konjera, Francis Shonhayi, Agent Sawu, the Ndlovu brothers Peter and Adam, this was the team which made Zimbabweans daring to dream.

That team was on the brink of securing a place at the 1994 FIFA World Cup finals in the USA, 90 minutes seperated them from qualifying for the global showpiece and they would have been the first Southern African country to do that.

What stoold in the way of Fabisch and his charges making history was a Cameroon side which had been at the previous finals in Italy, where veteran striker Roger Millan’s heroics had propelled them to an incredible run.

In front of a capacity crowd at the Stade Ahmadou Ahidjo Stadium in Yaounde on the 4th of July 1993, the Warriors knew that only a victory would ensure a ticket to the United States finals.

Unfortunately, they eventually succumbed to a 1-3 defeat to the Indomitable Lions in a dream-crashing encounter for Fabisch’s troops.

That was the closest Zimbabwe ever came to booking a place at the World Cup finals.