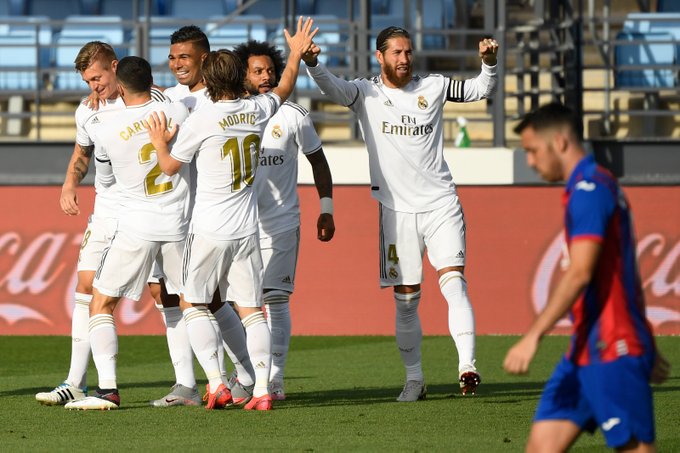 Real Madrid resumed their LaLiga title chase with a   3-1 victory over Eibar at the Alfredo Di Stefano on Sunday.

Zinedine Zidane’s men were back in action after the Covid-19 enforced football break and wasted no time in showing their intentions when midfielder Toni Kroos put them in front with a well-taken shot just three minutes into the clash.

Just after the half-hour mark, Los Blancos captain Sergio Ramos doubled their advantage, tapping  into an empty net after being set up by a selfless Eden Hazard following a brilliant counter attack move.

Marcelo made it 3-0 with a thunderbolt just before the break and took a knee and raised his fist in solidarity with the #blacklivesmatter campaign as Zidane’s men showed no signs of stopping.

Madrid looked to have taken their foot off the table after the restart and allowed Eibar to pull one back on the hour mark through Pedro Bigas.

Zidane made some changes thereafter, with Eder Militao replacing Ramos while Gareth Bale came in for Rodrygo.

Eibar were clearly the better side in the second stanza but Madrid held on for an important win which sees them cut the intial five point gap on Barcelona before kick off, to two.