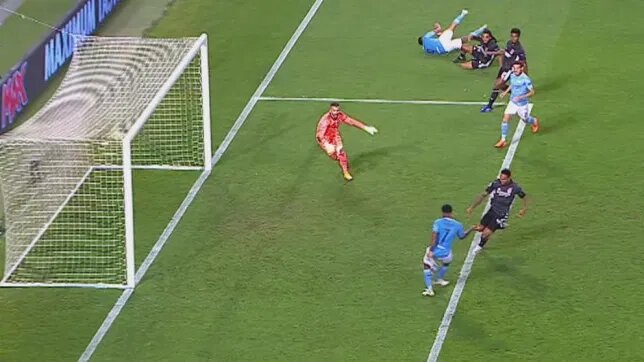 Manchester City coach Pep Guardiola has rued Raheem Sterling’s miss in their defeat to Lyon in the Champions League on Saturday.

The EPL side failed to progress through to the semifinals for a third consecutive season following a 3-1 loss to the French club. Moussa Dembele struck twice late in the game after Kevin De Bruyne had cancelled out Maxwel Cornet’s opener.

But the complexion of the game could have changed by Sterling in the 86th minute. The striker blazed his shot over the bar in front of an open goal from five-yards out which would have made it 2-2.

City went on to concede within a minute after the miss when Dembele pounced on a poor parry from Ederson to extend the lead.

Speaking after the game, Guardiola said: “We created chances, scored a magnificent goal, but unfortunately missed another one.

“In this situation, you have to equalise and go to extra-time in the last minutes, and after, we concede the third goal.

“In this competition, you have to be perfect. We created more chances, more shooting, but unfortunately, we are out again.”

On his thoughts about the team’s performance, the coach said: “One day we will break this gap to the semis. In the first 20, 25 minutes, we struggled to find spaces to attack.

“The second half was okay – we were there. I had a feeling we were better. You have to be perfect in this competition.”