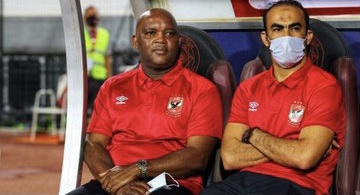 Former Tottenham Hotspur star and Egyptian legend Ahmed Hossam Mido, has showered Al Ahly coach Pitso Mosimane with praise, saying he has transformed the Red Devils so much so that they are even playing like Liverpool.

Mido has nothing but praise for the outspoken coach.

“During the first-half, Al Ahly appeared very poorly against Entag El-Harby. Their opponents had the advantage over them,” Mido was qouted as saying by renowned football publication KingFut.

“However, Al Ahly under the leadership of Pitso Mosimane is distinguished by some specific details and the South African’s touch can be seen.

“Mosimane’s Al Ahly play from the back and are very quick in applying the pressure. They became like Liverpool.

“Before Hussein El-Shahat’s goal, the ball was possessed by Entag’s players, before four or five players from Al Ahly applied high pressure and managed to intercept the ball.

“This is Mosimane’s touch that we didn’t see with former head coach René Weiler,” Mido added.