OTD in 1997: Peter Ndovu helped Coventry to a crucial come-from behind draw at Southampton 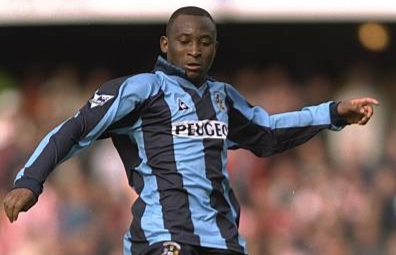 On this day in 1997, legendary former Warriors captain Peter ‘The Flying Elephant’ Ndlovu scored in Coventry City’s entertaining 2-2 draw with Southampton at The Dell.

The Bulawayo-born star, who was the first black African player to grace the English Premier League, helped his side come from behind to register a crucial point which was key in their fight for survival.

The Sky Blues went behind in the first half, when Southampton’s Mike Evans headed home close range, the opener.

Southampton doubled their advantage shortly after, when an own goal left Coventry trailing 0-2 and with a mountain to climb.

Ndlovu would start what would be a remarkable come-back, when he reacted quickly to a poor back pass to brilliantly pull one back for his side.

The come back was eventually completed when Noel David Whelan’s header on the back post levelled matters for the Sky Blues.

Below are the highlights of the match.

OTD in 1997: Peter Ndovu helped Coventry to a crucial come-from behind draw at Southampton